A light-weight neutral daily trainer for your next marathon 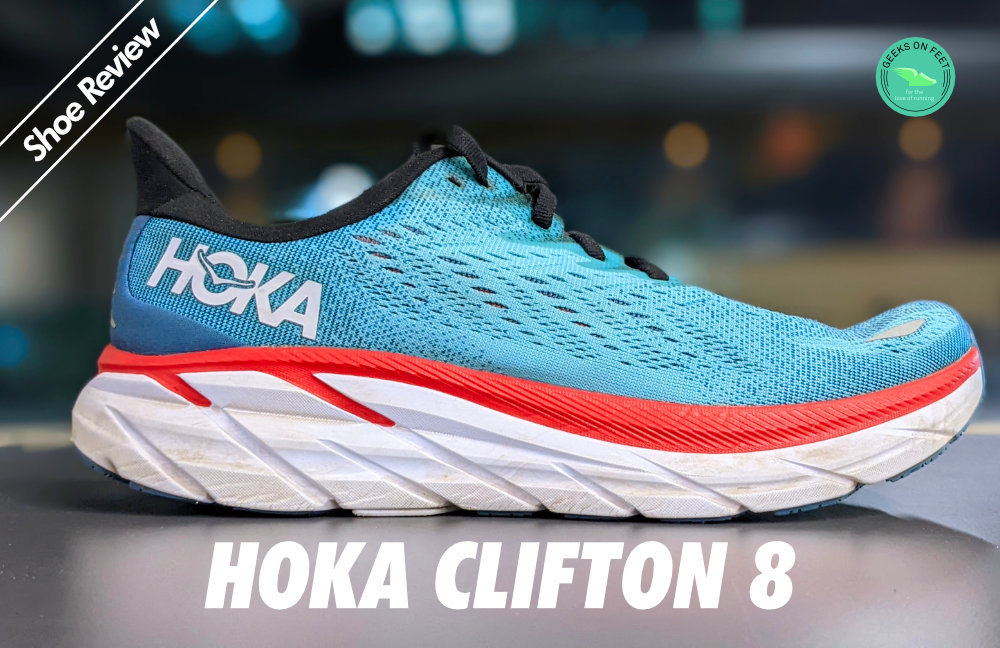 Hoka’s (erstwhile Hoka One One, pronounced on-ay on-ay) India launch was perhaps a silent one. The launch lagged all the fanfare otherwise the brand deserves for its success in the rest of the world in such a short duration. Once a trail running shoe manufacturer is now unarguably the loved cushioned running shoe creator. The ‘bulky yet lighter” has been the theme for Hoka since its inception and it’s no different for its latest daily trainer, Hoka Clifton 8. “Why change something that works well, right?” The Clifton 8 also is an exceptional example of “it is not what you see”. While Clifton is in its eighth iteration, Clifton 8 is our 1st review from the series which will naturally limit our analysis to the present iteration without any comparison to its predecessor.

In India, the shoe is exclusively available on Tata Cliq, and is currently priced at INR 11,999. While even the Carbon X2, Hoka's premier carbon plated shoe is available on discount, there isn't any on the Clifton 8.

The Hoka Clifton 8 is a maximum cushion neutral trainer. The shoe features an early stage meta rocker and an extended heel crash pad, built using an EVA foam midsole, meant for a smooth and a soft ride respectively. The early-stage meta rocker, like the Hoka’s Carbon X and Rocket X, is placed right behind metatarsal heads to create a smoother ride and a faster transition to the forefoot. 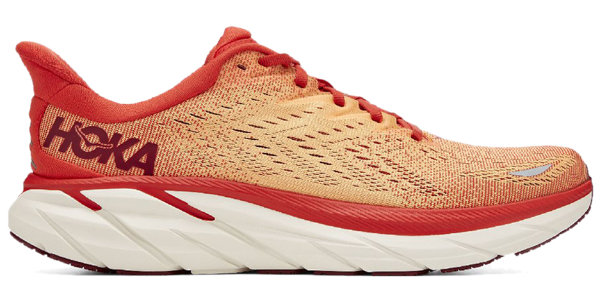 What makes up Clifton 8?

The midsole of Clifton 8 is made of compression-molded EVA (CMEVA) foam. Hoka changed its midsole compound in the eighth iteration to make the shoe 15% lighter than its predecessor. Even though the cushioning is plush, Clifton 8 doesn’t fail on the responsiveness during the ride. We compared it with other balanced cushion daily trainers and trainers that are plush, and the Clifton 8 is evidently lighter compared to other popular trainers like Nike Pegasus 38 and Puma Velocity Nitro 2. 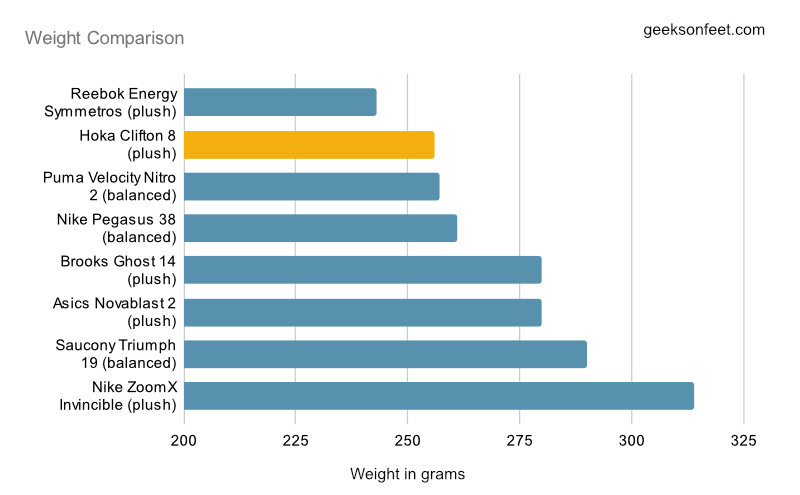 We have measured the softness of the midsoles of few popular daily neutral trainers with a Shore Durometer. In terms of midsole softness Clifton 8 on par with most daily trainers. 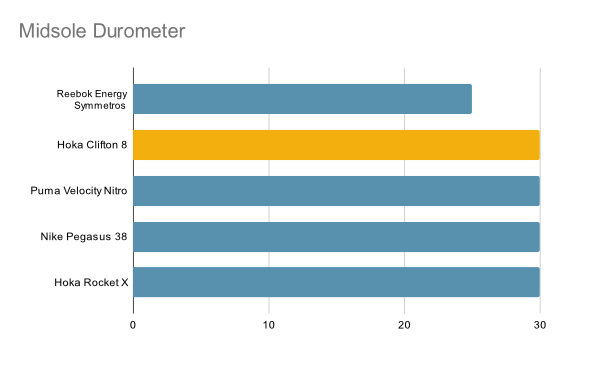 Softness is on par with popular daily trainers

The shoe has a stack height of 29mm on the heel and 24mm on the forefoot with a 5mm heel-to-toe drop. That’s just for the heart of the shoe - the midsole. You additionally get a spongy 5mm Ortholite insole, making the ride even more softer.

The Clifton 8 features a decently ventilated 100% engineered mesh in the upper and a plush gusseted padded tongue. The upper is made of 100% vegan materials. The lacing is traditional and almost enough for you to lock your heel additionally if required. 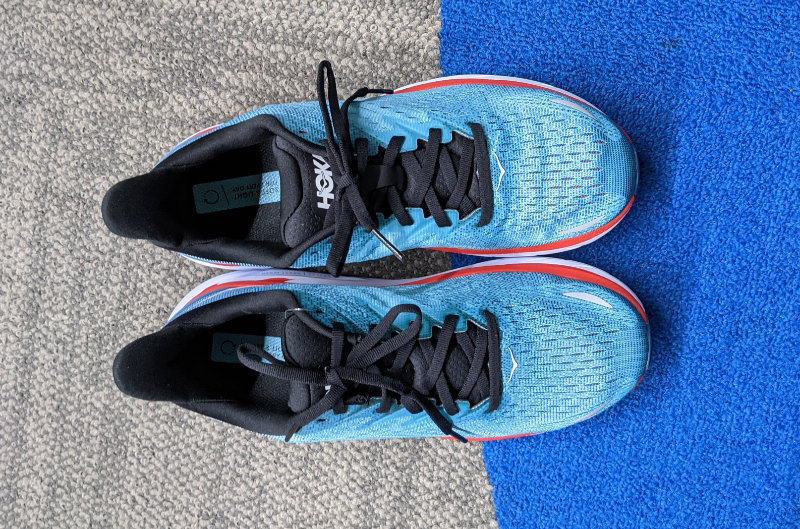 The heel counter on the Clifton 8 is rigid but the plush around the counter is enough to not irritate the Achilles. It carries the ‘elf ear’ design for easy slip-in and also to prevent heel slippage. Saying this, the heel counter is where I struggled, you can attribute it to my Haglund deformity. This is more personal and might not apply to all the runners.

The heel counter packs a reflective material for a safer ride in the low-light conditions.

Since the road races in India were slowly getting back on track since the pandemic, the hope to run my first full marathon at the Tata Mumbai Marathon was wildly back. Putting on mileage to train for the marathon is universally basic, and my plans were nothing different - to stay on foot for as long as possible. The hunt was to find a highly cushioned daily trainer to put on mileage, and the timely Hoka’s launch in India meant a no-brainer to go for the Clifton 8.

The Clifton 8 looks huge right out of the box. But hey, don’t let the look of it fool you. It’s certainly one of the lightest cushion trainers out there. It’s genuinely not a highly cushioned shoe, like the Nike Invincible Run, but perhaps a well thought and balanced one.

The first ride on it was definitely a painful one since I felt irritation on my Achilles through the 5KMs, and since then, a silicon heel cup coupled with heel lock lacing has come to the rescue. If you are someone who has a troublesome Achilles history, please try it before getting them on runs.

The Clifton 8 felt rigid initially and took a handful of runs to break in and get the comfort out of the cushion. The Clifton 8 will be your long-run and recovery run go-to trainer. The cushion is a balanced one, yet slightly leaning towards the softer side which makes it less responsive. The ride is mildly responsive, thanks to the rocker on the forefoot, and is evident only during the long runs since the rocker isn’t an aggressive one unlike the one in the ride series from Asics.

I have run more than 220KMs in the Clifton 8. Predominantly I have used them for the long run and the easy run days, while have attempted a few intervals and tempo runs for review perspective. The CMEVA midsole of the Clifton 8 is not just softer, but lighter too, and the credit goes to Hoka designers for perfecting that balance. It's an out of the box long run, easy run, and recovery day shoe. I have done (run) two marshmallow rides of 30KMs and two 25KMs in the past two months, all considering the disappointing break-in experience. The geometry of the shoe suits the midfoot landers and that’s where you will have something to gain from the rocker, especially in the long runs, where your legs feel as fresh as in the start. 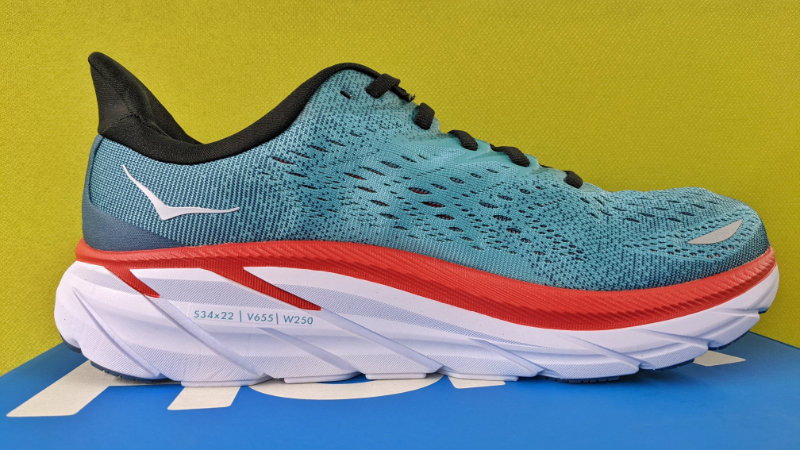 Rocker works fine and is not aggressive

If not for this review, I would not use the Clifton 8 for speedier workouts. While it's not impossible to run speed in them, but you'll feel the softness on every stride instead of the required rigid response and the ground feel for intervals and tempo runs. Also for someone like me who trains intervals, tempo, and races with a more aggressive rocker shoe like the Asics Evoride 2, the rocker on the Clifton 8 is a bit disappointing.

All the miles clocked on this shoe have been on road and while I'm yet to take this off road, I'll be comfortable in taking Clifton 8 off road because of the grippier outsole.

Clifton 8 fits true to size, and indeed even more for the narrow feet. It holds the midfoot really firm and yet carries enough space in the toe box. Hoka also runs a wider width option. The upper is made of engineered mesh and has been reasonably breathable during chilled conditions. It’s definitely not ventilated enough to go well with the upcoming hot and humid conditions. The padding around the heel counter and the tongue make sure they run warm. The elf ear heel counter design makes it triathlon friendly - easier to pull on. 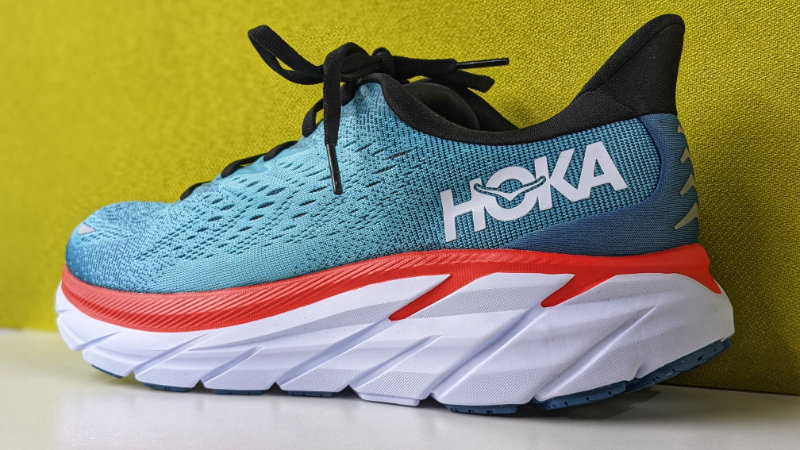 Most modern neutral shoes do offer some stability, and like the Hoka Rocket X (review), even the Clifton 8 offers a stable ride. The vertical sidewall grove on both the lateral and medial sides of the midsole allows the foam under the heel to compress and make it feel more cushioned and hence making Clifton 8 feel firmer.

The Clifton 8 has begun to wear out a bit, but this is natural for the 220+ KMs clocked using them. Hoka has done a fair job on the outsole in the Clifton 8. The outsole features a 3mm thick rubber, which has good grip and also aptly placed at hotspots for enhanced durability. 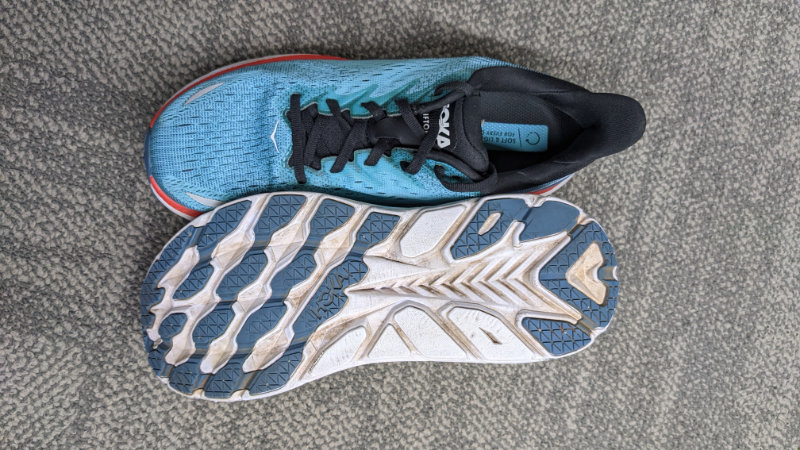 Outsole after 200kms of running

The Clifton 8 was originally currently available in 4 color options - blue, red, yellow, and black. The blue one I have is ‘kinda coral’ blue I believe and is the most appealing option available. The colors are punchier, especially the red sidewalls on both the sides from the heel to the toe add more to the aesthetics. The heel counter and the upper packs overlays with reflective materials which is both pleasing and useful. 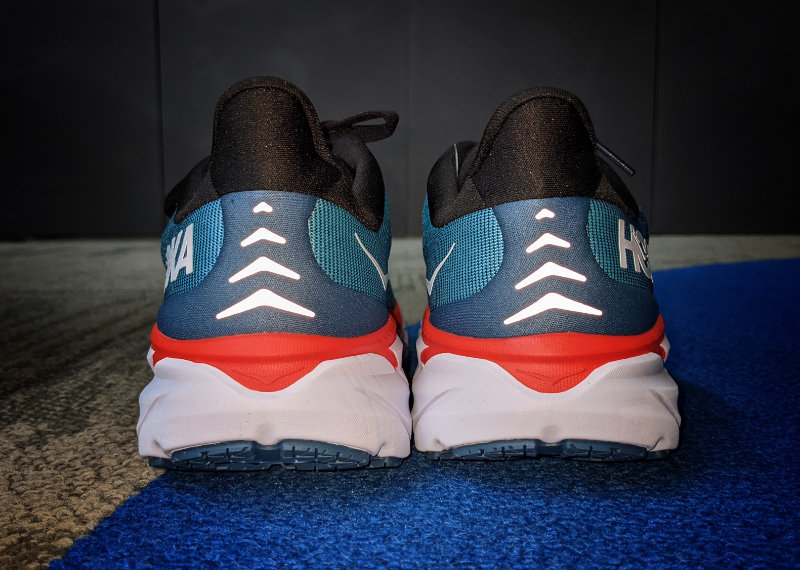 Reflective overlays are a nice touch

If you are looking to gear up your game from medium distances like a half marathon to marathon and more, Hoka Clifton 8 is highly recommended.

Beware of the fake websites that claim to sell Hoka shoes on the cheap. As far as we know, Hoka shoes are currently sold only through Tata Cliq in India. The following websites are fake

Karthik (https://www.instagram.com/runkarthikrun) is a business analyst by profession and a long-time volunteer contributor to Wikipedia. Apart from his enthusiasm for running and photography, advancements in mobile & wearables technology are of utmost interest to him. He is co-founder of Mumbai-based Tilaknagar Running Club.