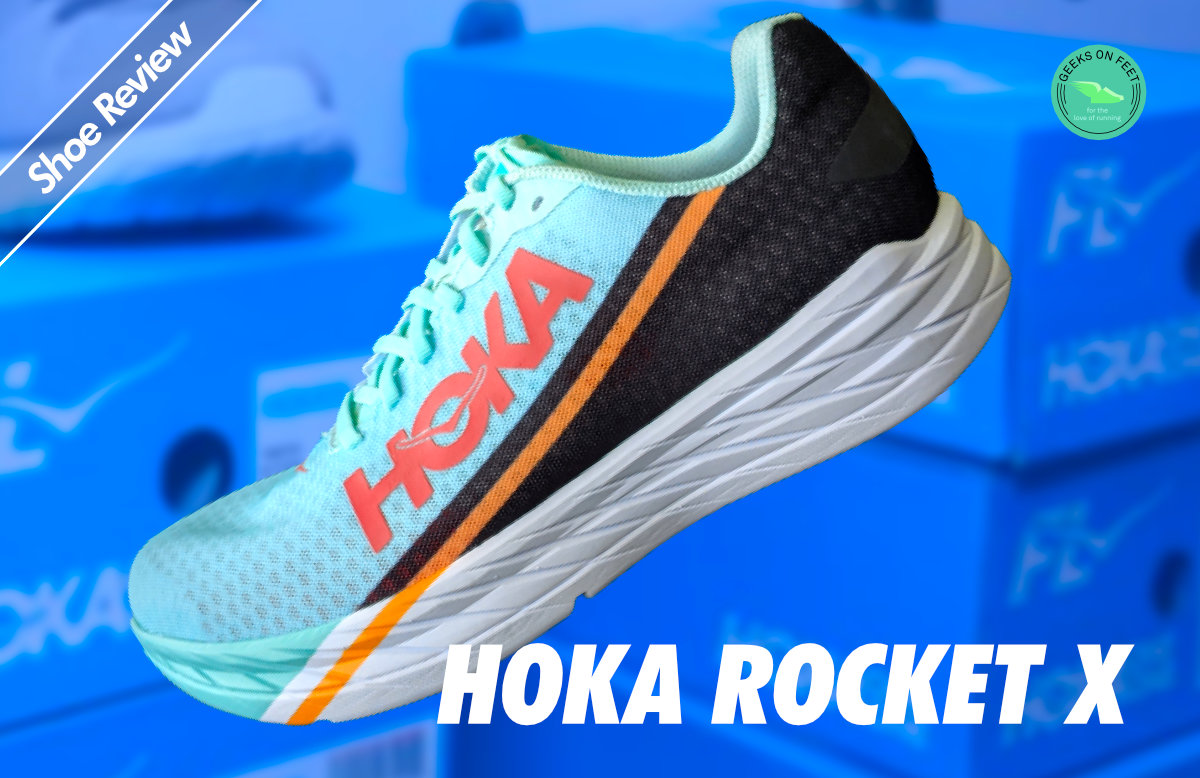 Beware of the fake websites that claim to sell Hoka shoes on the cheap. As far as we know, Hoka shoes are currently sold only through Tata Cliq in India. The following websites are fake

While we can continue to argue if the current trend of super shoes are good for the sport or not, we can all agree that these shoes with curved carbon plates have brought plenty of excitement to long-distance running. However, these are expensive and are targeted mostly for high-performance racing. Most runners find very little use of them in their training. Shoe manufacturers have been experimenting with carbon fiber plates that can be used to help runners of all types.

Hoka has been bold with their shoe designs in the past, and the way they use carbon plates in their line-up is no different. Hoka Rocket X is designed differently from super shoes and fills a niche among carbon-plated shoes. A mid-profile rocker with a full-length carbon plate, primarily aimed at speed runs and racing. Unlike others, it doesn’t have a high level of softer cushioning, nor does it offer the springy bounce. The carbon plate is primarily designed to provide faster transitions.

The pricing is a differentiator as well. The shoe is priced competitively on par with the other entry-level carbon shoes such as Nike ZoomFly, and Puma Deviate Nitro. Hoka Carbon X2, the other carbon plated shoe in Hoka stable, is priced slightly higher in India, offers more cushioning and better stability, is suitable for longer runs.

What makes up Rocket X? 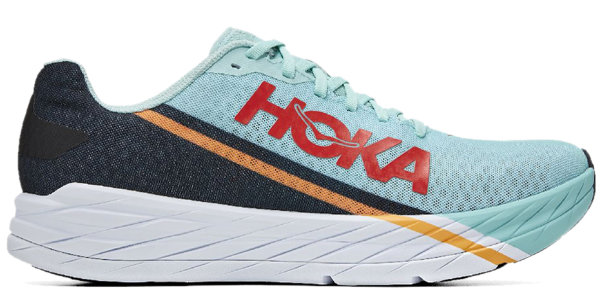 Rocket X is what Hoka calls an “Early Stage Metarocker”. Rocker shoes as compared to traditional running shoes have a midsole shape with a noticeable rise of heel and forefoot areas. These shoes offer better transitioning through the gait cycle from initial contact to push-off. “Early Stage Metarocker” shoes like Rocket X, Clifton 8, and Carbon X have their midsole rise up from just behind the metatarsal head. In other words, the rocker starts working as soon as the weight of the body shifts to the point just behind the metatarsal head. This is what makes early-stage rockers good for faster transitions.

The picture below shows the midsoles of Hoka Rocket X, and Nike Pegasus 38. As you can see the midsole starts rising up roughly about 4.6cm from the center of the shoe (for a shoe length of 30cm). However, the rocker in Pegasus 38 is much farther from the center of the shoe (8.4cm). So it engages much later in the gait cycle when compared to Rocket X. 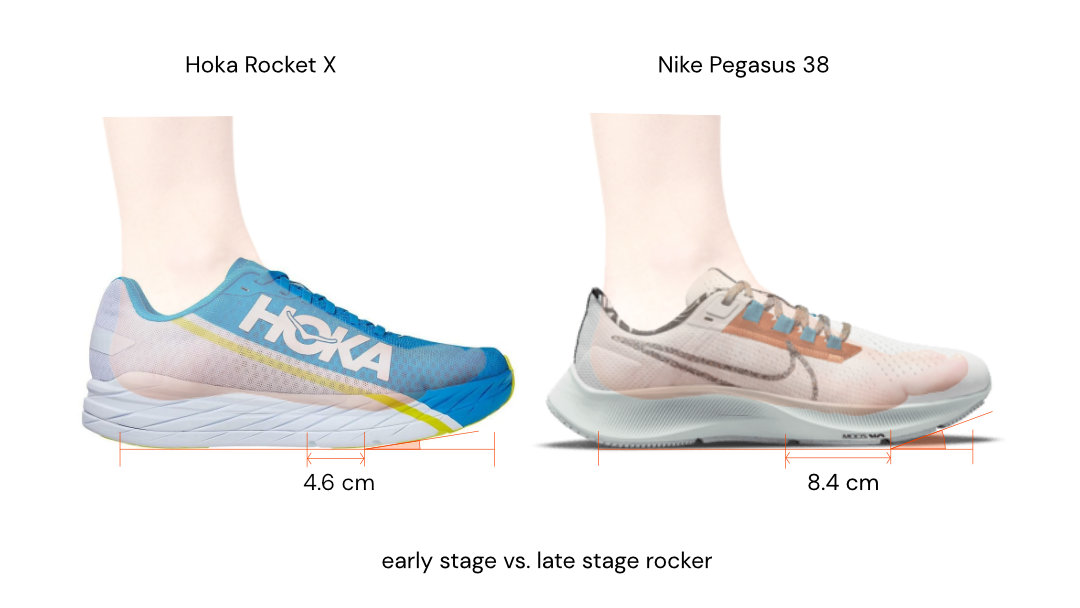 Published shoe weight is 210g (at UK 8), which is what makes it ideal for racing. We have measured the weight UK 10 at 217g. When compared to other carbon plated shoes in the Indian market, it is one of the lowest next only to VaporFly and Metaspeed Sky. In the sub 15k INR price range, it is the cheapest shoe. 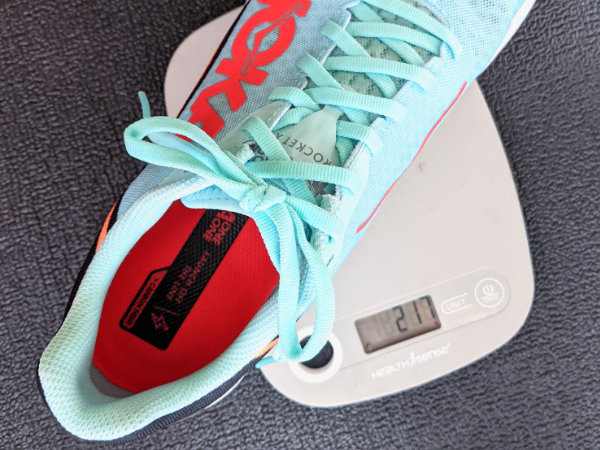 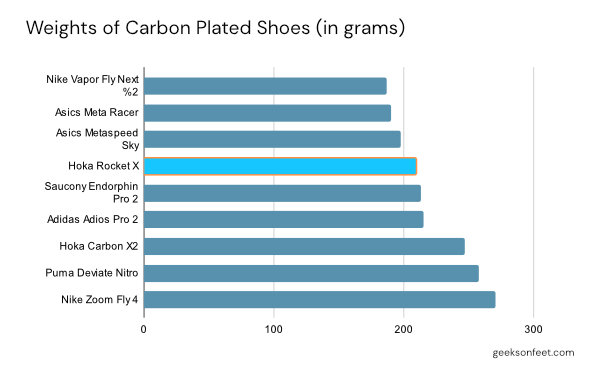 One of the lightest among carbon plated racers

The midsole of Rocket X is made of compression-molded EVA (CMEVA) foam. It has a stack height of 30mm at the heel and 25mm at the forefoot with a 5mm heel-to-toe drop. The midsole has two layers of foam between which the carbon plate is placed. The foam is well balanced, not very firm nor very soft. Both the layers have more or less the same softness when measured with a Shore Durometer.

The midsole foam is very well balanced in terms of softness. To get a view of the softness of the midsole, we have measured the softness of multiple shoes. it is softer than other carbon plated shoes like Nike ZoomFly 3 (React foam) and Puma Deviate Nitro (Nitro foam), while firmer than New Balance Rebel V2 (Fuelcell foam). 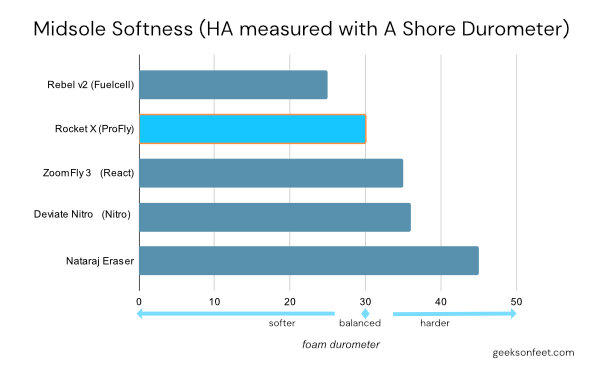 The carbon plate in Rocket X is much closer to the ground and has very little curvature compared to super shoes like VaporFly. This is the reason why Rocket X doesn’t have the springboard effect but primarily helps the transition from mid-foot to toe-off transition.

The upper is made of an extremely thin mesh. The mesh says loud and clear that this shoe is meant for racing. There are no overlays and not much support. It is highly breathable and airy, however, durability is a question. Though the forefoot runs a bit narrow when compared to other shoes, it doesn’t feel so when you wear it, as the upper is very light.

The tongue has no padding. It is attached to the upper with a thin supporting fabric. The laces go through the tongue at the fourth eyelet keeping the tongue in place. 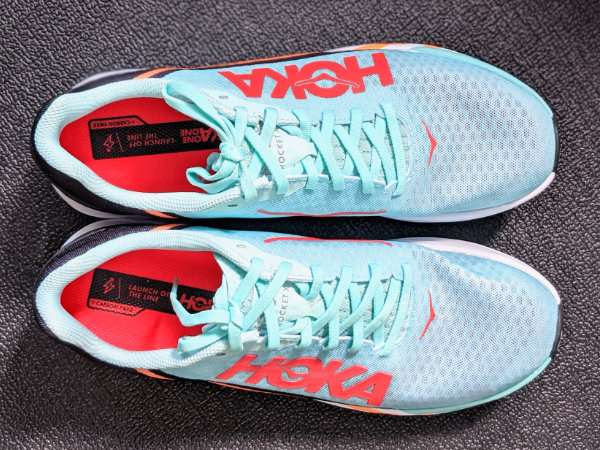 Upper is minimal and highly breathable

Heel has decent padding, which is an interesting design decision given other shoes in this category have very little to no padding. Despite the padding, the heel didn’t lock very well for me.

Well talking about outsole, there is not much to it. The lower layer of the midsole foam is exposed, except at a few important hotspots such as the lateral and medial heel, and the forefoot where durable rubber is placed below. 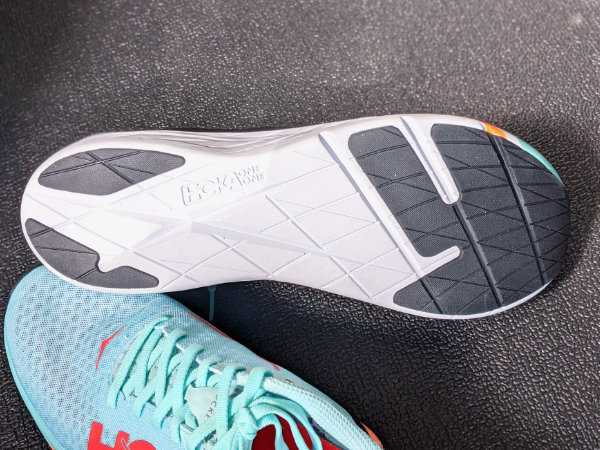 Rubber is only placed at hotspots

The first thing I’ve noticed when wearing the shoe is how less of a shoe it is. It is quite light, and with the thin upper it has it feels I am all set for some fast strides. The rocker can be felt almost immediately, and the fast transitions as you toe-off are clearly noticeable. My first run in the shoe was a half-marathon at my current marathon goal pace. I felt at home through the run, and no break-in was needed.

The shoe is true to its size, it however feels slightly narrower at the forefoot. The upper is thin and stretches a bit, so it is not a deal-breaker for me. If you have a wider foot, please try the fit before using it. The upper is extremely breathable and feels comfortable through the distance.

So far I have run about 100kms in the shoe. Given the purpose of the shoe, I have used it only for the faster runs, such as longer marathon effort runs, tempo runs, and speed intervals. The shoe has done remarkably well in all of them.

The cushioning is well balanced and just right for the longer runs. It is not too soft and not hard either. While I haven’t tried the shoe for more than 25km of distance, it seems capable to take it beyond. However, I am still not convinced if it can take a marathon distance. The stability of the shoe is not that great. Especially, in the latter parts of the runs, you can feel the lack of support.

The shoe responds well as I pick up the pace during my speed runs. The fast transitions really make it a joy to run the tempos. Lack of support does come in the way, and one needs to be cognizant about it.

Most modern neutral shoes do offer some stability. Hoka claims the use of two foam layers and placing the carbon plate close to the ground helps stability. Given the stack height is also not very high, one would expect the shoe to be stable. I feel the delicate upper is the reason why the shoe doesn’t feel stable. The foot moves laterally despite tightening the laces. 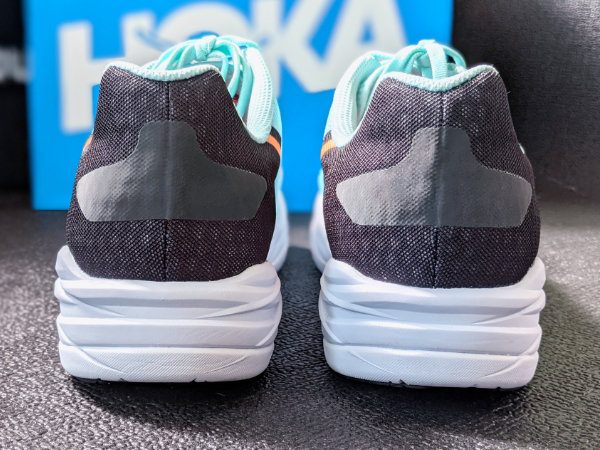 Heels are padded, but still slip

As expected, the lack of tread on the outsole makes it slippery on Indian roads. One has to be careful on roads with construction debris, especially while speeding on the corners.

While I didn’t feel any degradation in its ride characteristics even after 100 km, I can see the foam that is exposed at the bottom already has creases developed. That makes me wonder if this shoe can endure a lot of miles. Given it is a racer, durability probably is not its design goal. So if you are looking for a durable shoe, Rocket X may not be the one to pick. 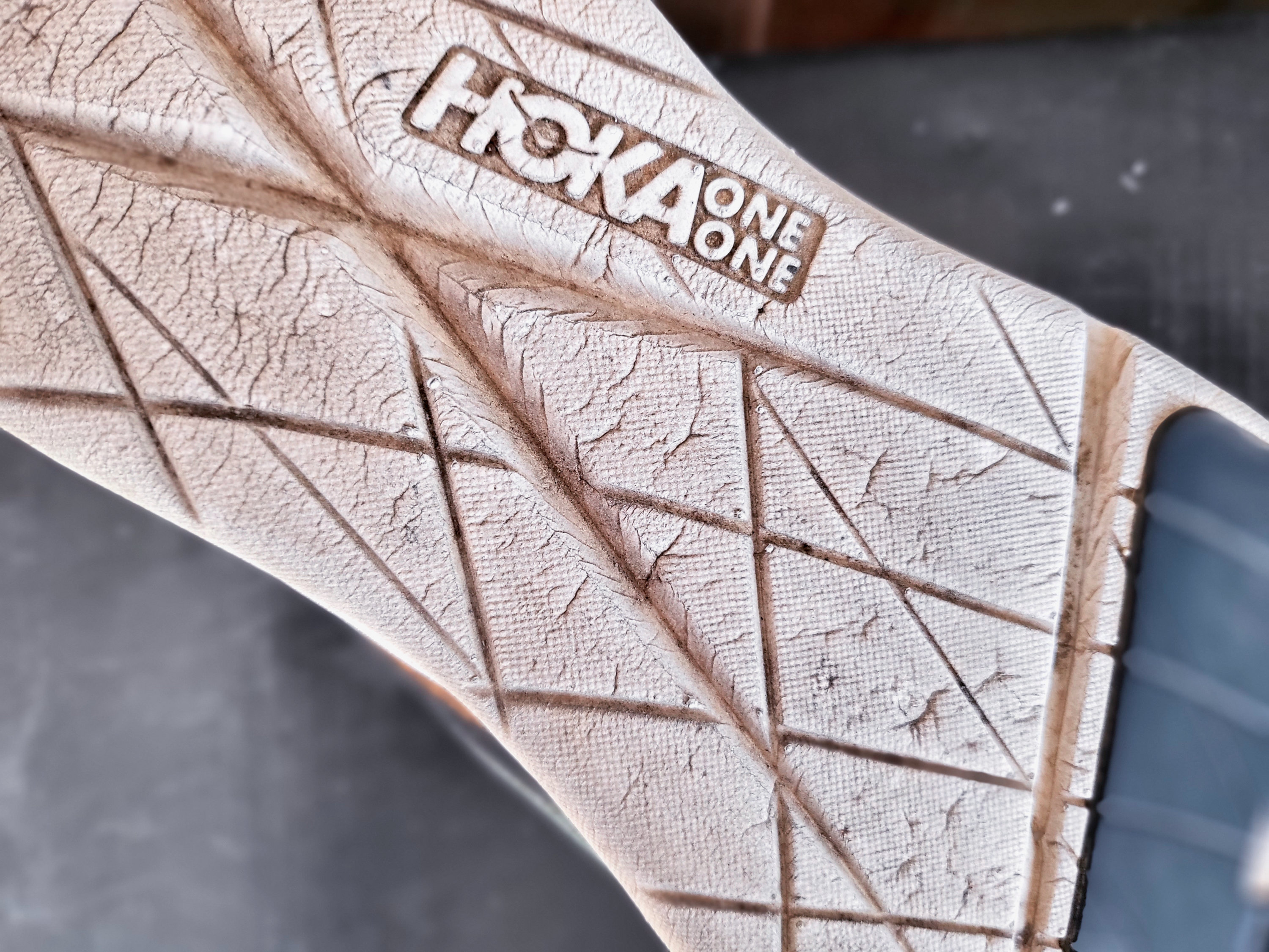 Outsole after 100kms of running

I have the eggshell blue colorway. The two-color pattern with a line separating them from heel all the way to midsole (at forefoot) sets it apart from other shoes. The color of the laces matches the upper too. The shoe really looked beautiful when it was new and clean. But it can get dirty quickly. The other colorways that are available in India are white and blue. Neither of these can handle the dirt well. So the only option is to clean it frequently.

If you are looking for an affordable carbon plated shoe for racing or speed training Hoka Rocket X is highly recommended. It is priced very well when compared to the competition. Rocket X however serves the niche of fast transition, and cannot be compared with premium racers such as VaporFly.