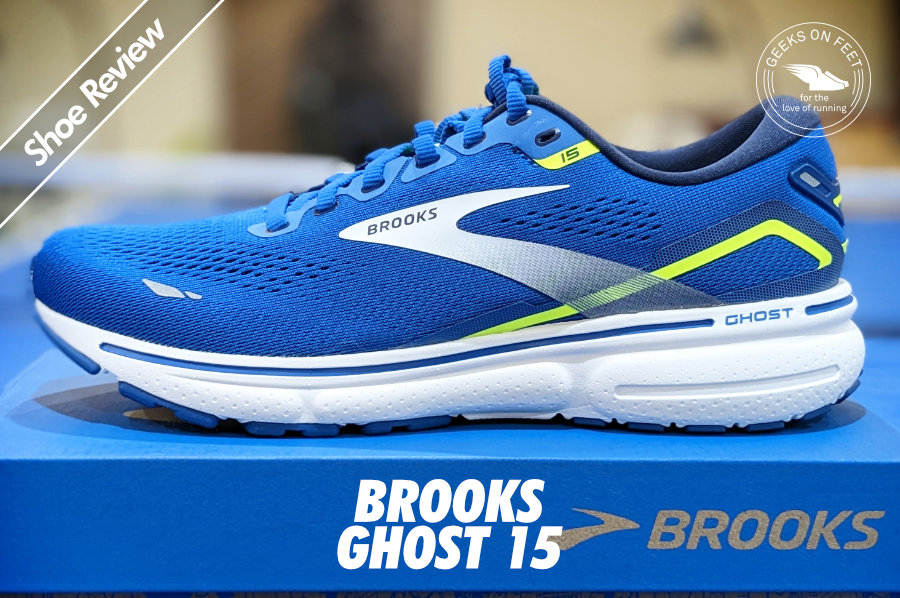 The intro, as always, made me dig into the history of where it all began. The Ghost series as we know, didn't really launch in 2008. It was a relaunch of much-loved Burn series, which took the burn. Burn was a low-cushioned neutral trainer, and runners loved it for its lightweight and aesthetics. It was 2008 when the first edition of Brooks Ghost launched. The series has become so popular that Ghost and Brooks are synonymous. Ghost series shoes are popular among runners due to the comfort the shoe offers.

Ghost 15 sticks to its legacy, and offers the same comfort and cushioning. It's a neutral daily trainer packing a mix of classic and modern elements. Compared to its predecessor, the midsole got a significant update. It is now lighter and softer than before.

So how does the Ghost 15 perform? Spoiler alert! If you are a Ghost loyalist, you will love this one more than ever. If not, errr, you should dive into the detailed review and check it out what the shoe feels like. 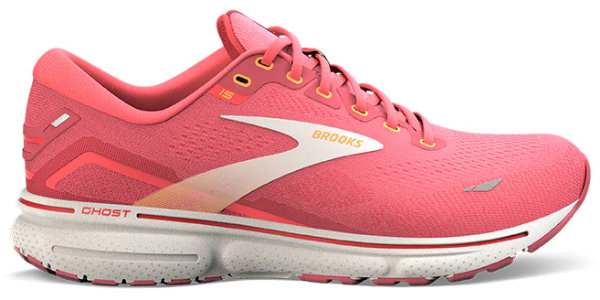 What makes up Brooks Ghost 15?

The Ghost 15 is the same traditional comfort-oriented neutral trainer. Not many things have changed when compared to its predecessor. It packs the high 12mm heel-to-toe offset, with stack height of 35mm (+3mm from Ghost 14) on the heel and 23mm on the forefoot. Its published weight is 286g (for UK 8), which is the same as its predecessor. But it is slightly heavier when compared to the new age daily trainers. Skechers GoRun Ride 10 and the Saucony Ride 15, are a few examples which weigh much less. Even the other best-selling running shoe counterpart, the Nike Pegasus 39 had shed some weight in 2022, yet kept all the elements it's known to offer.

In India, the Ghost 15 retails for ₹12,499 (about $154 USD), which is about 10% more than the retail price in the United States. This is also slightly pricier than the other daily trainers in the market. However, some of the features may justify the premium price.

The midsole is where the Ghost 15 sees a significant update. It features a full length DNA LOFT V2 cushion foam, which Brooks says is more softer and lighter than its predecessor. DNA LOFT is proprietary cushioning foam which is made up of a combination of EVA foam, rubber, and infused with nitrogen gas. We measured the durometer of both editions in our lab, and can confirm that Brook's claim of softer midsole is true. 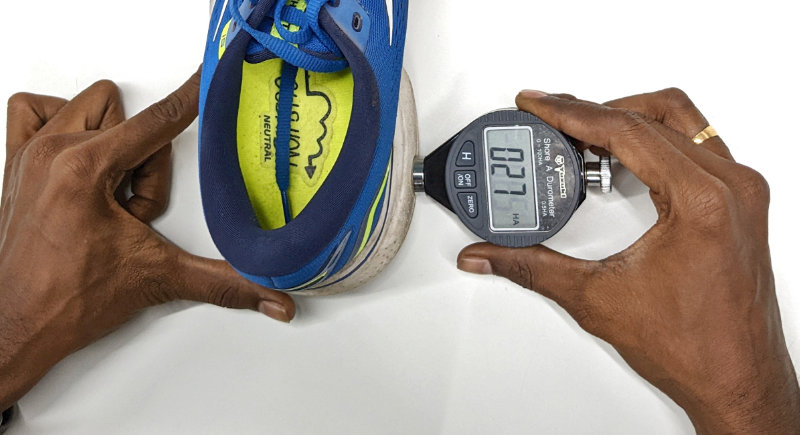 The Ghost 14 measures at 32, whereas it is 27 for the Ghost 15. It even got more flexible compared to the Ghost 14. The Ghost 15 also packs the segmented crash pad, to help smoothen the transition from heel to toe. 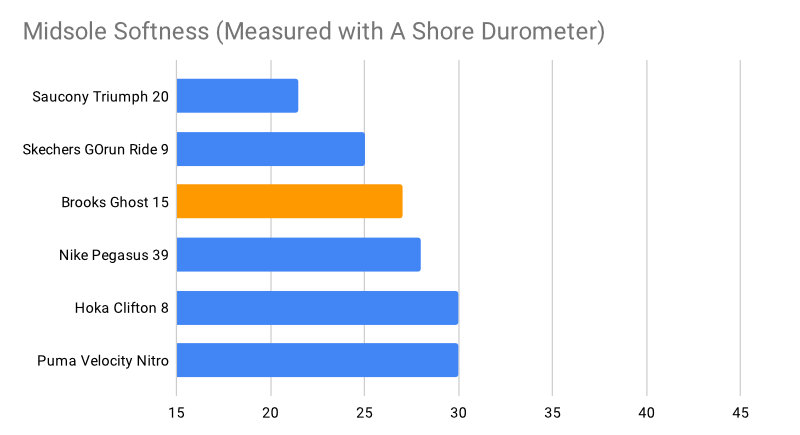 Compares well with other midsoles in the category

There’s nothing majorly exciting in the upper. It features an engineered mesh which is quite comfortable. It’s not a single-layer mesh, yet it runs breathable. Brooks uses its 3D Fit Print technology, giving the upper an engineered structure and flexibility. Brooks says that over 60% of the upper is made up of recycled materials. A lot of the brands are now using recycled materials made of plastic bottles from landfills and converting them to usable filament fibres, hence reducing the environmental impact. 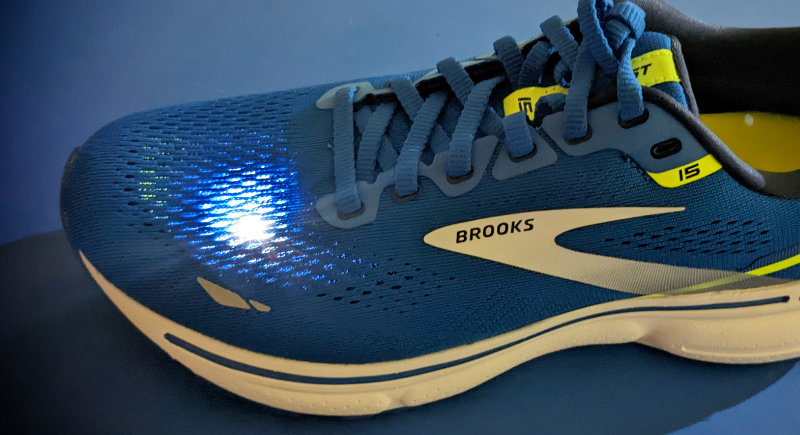 Upper is airy and extremely comfortable

The heel counter in the Ghost 15 is pretty rigid and offers good stability around the ankle. There’s a reinforced wing-shaped plastic support that wraps the heel. There are reflectors on the sides. Inside is a soft and plush cushion padding that offers great comfort, thus no irritation felt on the heel. There was no heel slippage so I never had to use heel lock lacing, something that was a bummer for me in the Hoka Clifton 8. 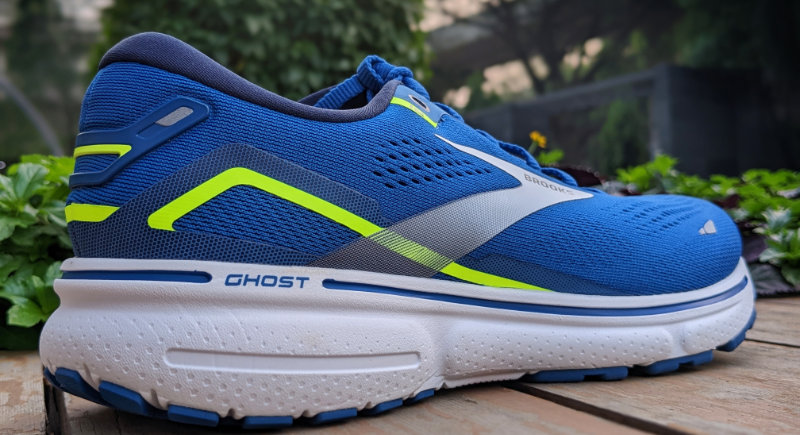 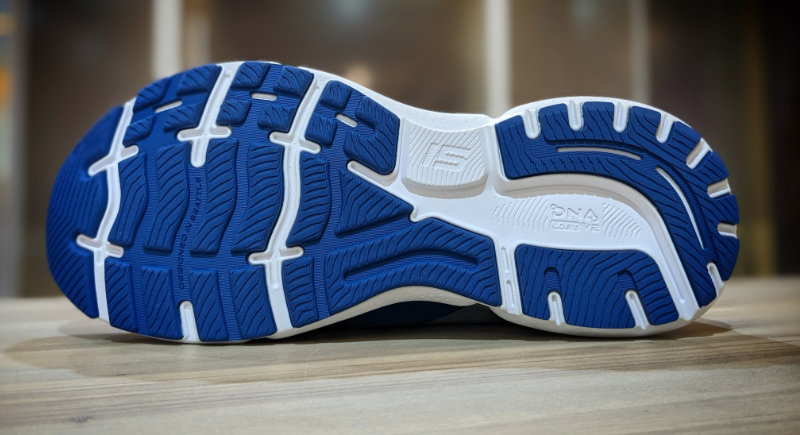 I have been eyeing the Ghost series since its 13th edition. The Ghost 15 came at the time when mileage was in focus in my marathon training block. Technically, I like to train in high offset trainers, courtesy Haglund deformity that I’ve. It's a big deal for me since Ghost 15, like a classic trainer, packs a 12mm offset. Not just that, I was looking for a trainer with more comfort and an apt cushion to put on the mileage-based runs. Ghost 15 checks all the boxes.

I have run about 190 KMs in Ghost 15 as of the day of publishing this review. My break-in run felt like I had met a perfect training partner. It was an easy-paced 10K averaging at pace 6:00 min/km. If I had to rate the Ghost 15 based on my first experience, it would have been a 10 on 10.

The next run was the 30K long run. The easy pace felt comfortable and stable. I can feel the midsole accepting the impact really well. It is not convincing that Ghost 15 has an offset of 12mm. It was pretty easy to land on my forefoot. All was fine until my legs started giving up, after 26KMs. It feels a little heavier once you are tired and the days when my legs are sore. The ride felt similar during my other 32K (20 miler) long run. The heavy feel could also be because of me moving into the Ghosts after putting a lot of similar miles on the Saucony Triumph 20 (review)and the Hoka Clifton 8 (review).

Since then, I have mostly run in Ghost 15 for all my easy mid-distance mileage runs. I have also attempted some strides and a tempo run to understand how it performs. The Ghost 15 does a fine job when picking up the pace up to an extent. It feels squishy once you hit the tempo paces. Is it versatile? Yes, up to an extent. You'll feel nice running from an easy to moderate pace. Do you want a neutral trainer that can pick up some intense paces? Check out the conclusion for recommendations. 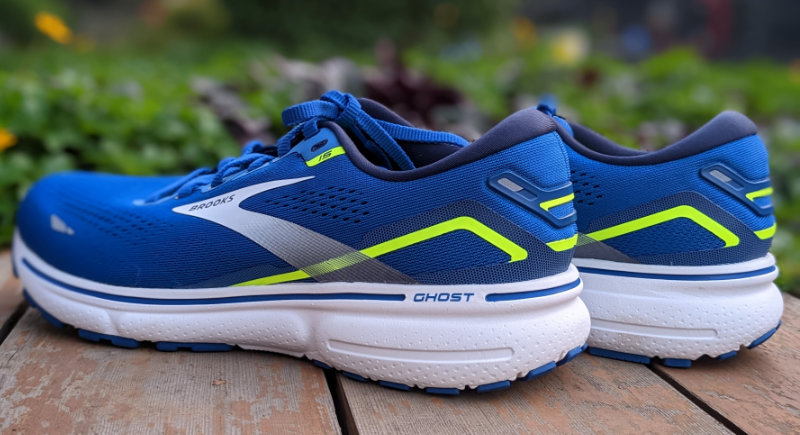 Versatile enough for most runs, but not great after fatigue sets in

Can we just cut this section short by saying the Ghost 15 aces in the fit and comfort element and deserves a 10 on 10?

Right out of the box, one could sense the comfort. The heel counter is nicely padded, and so is the non-gusseted tongue. There is no irritation on the achilles. The Ghost 15 fits true to size. For someone with narrow feet, you'll feel the tox box is spacious. Brooks also runs a wide variant, to make sure everyone’s covered. The lockdown is also handled very well. The upper gives a socks-hugging feel. Ghost 15 surprisingly feels breathable despite the padding, which probably makes it my go-to trainer for the long runs during the summer.

The Ghost 15 is on paper a neutral daily trainer, but has packed a few stability elements. The rigid heel counter paired with an arch support gives support to the ankle and the heel whereas the wide platform underneath offers a stable ride. The good midfoot lockdown made sure that cornering was worry free. The Ghost 15 will do nearly good for mild overpronators.

The Ghost series has been rhyming with durability since its inception. The midsole is well protected by a rubber in the outsole which runs deep. In my runs close to 200KMs, there's barely any wear and tear to be seen. Undoubtedly the Ghost 15 is gonna last long just like all of its predecessors have been. I put the Ghost 15 on par with the Pegasus series in terms of durability. One can expect it to last quite comfortably for at least 800KMs. While most of my runs have been on road, I have run occasionally on some rocky patches and on wet patches where the Ghost 15 have gripped very well. Since I don't own any trail running shoes, I wouldn't hesitate to take them on an occasional trail run.

Brooks Running India sells Ghost 15 in 10 different colour ways. I have the blue night life variant, which looks exciting compared to all. The variant I have has got some reflective elements, but may not match the one we had for the Saucony Kinvara 13 (review).

As a Ghost series fan, I would like to see Ghost match or better new-age daily trainers, which offer a lot of versatility. I would like the Ghost 16 to offer much more versatility. Packing in the nitrogen-infused DNA LOFT v3, from the Glycerine series will give some excitement underneath. If this can be done keeping in the present-day configuration with reduced weight, the 16 would be my dream daily trainer.

Not very versatile
Not the lightest, when compared to peers
Runs dull

The Ghost 15 is still a classic daily trainer, which aces many of our test parameters. The comfort is top-notch, the cushion is apt, the upper is breathable, the stability is right and has always been durable.

The shoe will remain an easy-to-recommend to all new beginners. For experienced runners, the Ghost 15 will be an ideal easy mid-distance workhorse, and that’s exactly where it will be used in my rotation cycle. Other shoes in my rotation cycle, Saucony Triumph 20 for long runs, Hoka Clifton 8 for recovery and the Nike Zoom Fly 4 for tempo workouts and race day.

If you are looking for a more versatile daily trainer from Brooks, which can pick up pace for mid-distance runs, you can try the lightweight and the low-to-ground Brooks Revel 5. If you are looking for some pep underneath while you aspire to clock miles, the Glycerine 20 would be ideal. The Ghost 15, if it had some more response underneath and had it run lighter this year, it would have been the top neutral-trainer of the year. To conclude, the Ghost 15 is a reliable, comfortable and durable daily trainer one wouldn’t regret having in their shoe rack.

Karthik (https://www.instagram.com/runkarthikrun) is a business analyst by profession and a long-time volunteer contributor to Wikipedia. Apart from his enthusiasm for running and photography, advancements in mobile & wearables technology are of utmost interest to him. He is co-founder of Mumbai-based Tilaknagar Running Club.